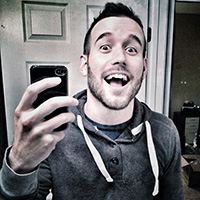 David manages and updates content, SEO, and web design elements on all Intown Web Design websites. His background is in multimedia, marketing and design where he learned the essentials to running popular websites. David worked on several projects before he came to Intown Web Design in 2010 including films and personal blogs. Since his arrival he built JoomlaHosting.co as a partnership site with Intown Web Design.

David's made his first website in 2000 using the Geocities platform and a domain redirection tool called '.tk'. The it was called, 'onionz.tk'. David's interest in websites thrust into overdrive when his Legend of Zelda based fan-film "The Hero of Time" reached millions of viewers worldwide because of emerging online sharing networks like Youtube and Facebook in 2006. He successfully turned a viral video into a lasting brand called, "The Hero of Time". During a three week partnership with DailyMotion.com in 2010 the film was viewed over 250,000 times. The following month theherooftime.com received over 4 million unique hits. Today, David sticks mostly to web development and continually updates Intown Web Design's websites.